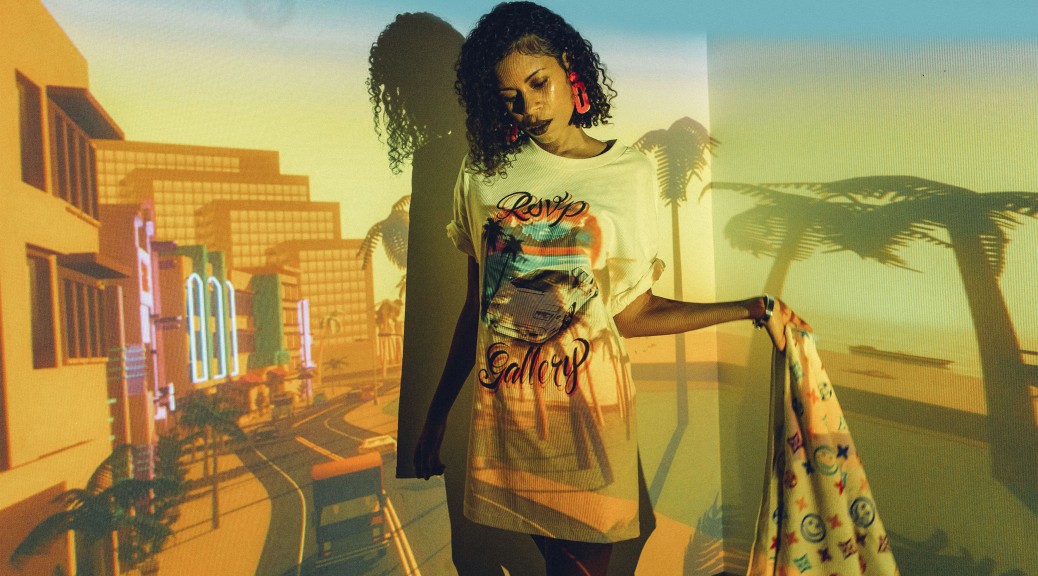 Aluna Francis of AlunaGeorge is fresh off of an exhilarating performance with her band at Lollapalooza. Their success has come slowly, but rightfully. The group, comprised of Aluna, the frontwoman, and producer George Reid, didn’t get their break until a DJ Snake remix of their hit single “You Know You Like It,” broke the charts nearly two years after its release. Now, set to drop their second album, the duo is trying to prove that they are here to stay. With a lead single featuring up-and-coming dancehall artist and infamous Drake collaborator, Popcaan, the group is picking up steam. Their most recent release features Drizzy and Leikeli47 and has been heralded as an anthem for girl power in 2016. Aluna came through RSVP Gallery to pick out some of her favorite pieces and sat down for a conversation in the newest episode of our Artist Series.

RSVP: Do you have any fond memories of Chicago to date?
Aluna: The first time we came to Chicago, there was this huge, classic Chicago storm. We all got evacuated. Everybody who was playing had to be shoved into this one room and it was boiling hot, still, so people were trying to sit by fans and all of the sudden the wind blew and all the fans popped out of all the windows and everyone started freaking out. We’ve got shots of us playing [the show] with lightning in the background it’s really sick.

RSVP: What did you do the first time you visited the city?
Aluna: When I first came I just wandered around and found this store and the people working there were really sweet. We got to chatting and brought them to the show. Everyone here is just chill and friendly.

RSVP: Are you a fan of deep-dish pizza?
Aluna: No, I don’t even eat bread, and that’s like, mostly bread. It’s that gluten.

RSVP: You’ve been into music and performing from a very young age, who were your earliest influencers?
Aluna: Have I? I don’t know if it was any good, though. I didn’t really consider that to be anything to do with my career. I remember when I was like, 7, I would come up with wonderful performance ideas with my best friend. But, when it came to performing [the routines] to the adults, she’d be like “Hell no, that’s a terrible idea,” and I’d be like “This is the best bit! This is where the people clap and say ‘You’re not rubbish’!” and she would back out, so I would take one for the team.

RSVP: What was the first album you ever bought?

Aluna: I didn’t buy things because I didn’t have any money, but my dad got me Whitney Houston and Mariah Carey, and said “This is singing,” and I thought “Damn! I’m never going to be a singer, I can’t sing like that!” I don’t sing like that, but I’ve differentiated myself.

RSVP: You and George met via Myspace, how has your relationship evolved since then?
Aluna: It’s evolved but it has also stayed the same. When we first met, we went to George’s bedroom studio and made a song in a day over cups of tea. There was barely any chit chat, we just got down to the exciting elements of making music together. We have always had that bond in the studio. It’s very symbiotic and doesn’t need a ton of explanation. We just bring a lot of ‘our’ form of comedy to it. A lot of the song would start with noises that made laugh or ideas that made us giggle and then we would build on those. What has really grown is our skill set. What we are bringing to the table is, maybe not as rubbish as it was, more consistently something we can move forward with, slightly more ambitious, and obviously we’ve gotten to know each other.

RSVP: From the beginning to now, have you changed your approach to making music at all?
Aluna: You can’t really get into a particular method because it would get boring as hell. But there are some parameters that we tend to always try and achieve. A certain structure around an idea that is fully formed. So at the end of a song, we always have to be able to play it on a guitar or piano, that’s a must. It has to have the foundations of a song that moves from the verse to the chorus to the verse in a way that is fulfilling and fully meaningful. If it’s a story you’ve got to tell the whole story.

RSVP: When was the first time you came to America?
Aluna: I actually lived in New Jersey between the age of 2 and 6. But now I’ve noticed that when you first come to America as an English person, you suddenly realize that A) you are incredibly rude, B) you’re a total geek and quite weird and quirky compared to most Americans. It’s a bit of a shock. I thought I was quite chill and maybe somewhat laid back, but all of the sudden I feel uptight. Our sense of humor is so dry.

RSVP: How often do you get to visit home? Is there anything you bring with you on the road to remind you?
Aluna: I get to visit everywhere a lot. I’m always ‘back in a month.’ And there is not enough room in my suitcase for my pictures, teddies, and books, unfortunately. I don’t have that many teddies, okay I have like one teddy

RSVP: Do you still get jitters before you perform?
Aluna: If I know that something is brand new, untested, guaranteed to go wrong or unrehearsed in general, yeah, I get nervous. Also if I’m in a strange environment, like maybe I’m the only band in an entire festival with DJ’s, that’s not comforting.

RSVP: Do you have any pre-performance rituals?
Aluna: If you go out on those stages dry you just stand out there, so yeah, I have to do tons of warm-up.

RSVP: What are the must-haves on your rider?
Aluna: My rider is very straightforward: I need to eat something. I need something to hydrate me, that’s it.

RSVP: I think the craziest I’ve heard is like, Lupe Fiasco asks for all yellow M&M’s in a glass bowl or something.
Aluna: See that’s clever. That’s cheap and weird. I need to be inventive with stuff that’s affordable.

RSVP: Do you have full control over your performance wardrobe?
Aluna: Sometimes I get peer pressure to wear something way outside my comfort zone, but I’ll try it because I think that thing itself is really cool. I remember wearing these thigh-high boots that were made of rubber and they were also both the left foot. They did make me look like a badass cyborg Wonder Woman, but I’m not a badass cyborg so I ended up feeling a little uncomfortable. I don’t have to wear anything [in particular], I just can’t resist sometimes, trying out something new.

RSVP: How do you choose when it comes time to step on stage?
Aluna: It’s based on what I have with me, what I have discussed with my stylist, and how much time there is to try on different outfits. I haven’t even had time to pick out my outfit for Lollapalooza.

RSVP: We [RSVP Gallery] have talked about how our styles have evolved, how did you dress growing up? How has your style evolved?
Aluna: Reduction of crap. There was like a weird period where it was very attractive to buy a few cheap things and then hate them after three months; high turnover. Then my wardrobe threatened to kill me one day and I chucked everything out. And I decided that I wasn’t going to buy anything that wasn’t, to me, a classic. Like this outfit I’m wearing right now, I know I will be able to wear this forever.

RSVP: Do you have any favorite brands, places to shop?
Aluna: My favorite thing to do is get in boys’ way in the menswear shops. Like Shoreditch has some sick menswear shops, that’s where I bought this. But for me to shop there they have to be trying to do something different, pushing it a little bit.

RSVP: I’ve read that you enjoy doing a lot of vintage shopping, is that true?
Aluna: Yea vintage shopping is great, who doesn’t love it? My favorite thing to do when I go to Paris is going to any of the vintage shops and get a trench coat. They’ll have like 100 and it’s like ‘Ahh!’

RSVP: Outside of music, what do you like to do with your free time?
Aluna: There is no outside of music, all of the traveling has to do with music. If I have time off, I will literally go home and discover my own house for the first time in months.

RSVP: I’ve noticed you’re rocking a lot of accessories, are they important to your wardrobe?
Aluna: Yea, accessories are important. I can’t wear them on stage so that gets really annoying. So when I’m off stage I like to put them all on.

RSVP: If you could work with any artist (musician or not) dead or alive, who would it be?
Aluna: That is the least original question, you and I both know that. But I’ll play along, Marilyn Monroe. We could do a duet, about Father Christmas. She already has a song about Father Christmas, so it could be like a soft, squishy girl-power song! [proceeds to riff about kicking men in their privates…]

AlunaGeorge’s sophomore album is set to drop in September, make sure to check out their website for more info on the album and tour. Stay tuned for more exclusive interviews in our Artist Series.